Well, the whole hurricane thing has blown over as it were. I was just on the Skype with a friend in Ireland and she told me my mayor said we were not allowed out until 3pm. I broke the rules and went out earlier than that for a walk.

I have to be honest, I was looking for wreckage. There really wasn't any. I did see a twig had broken off from a tree. 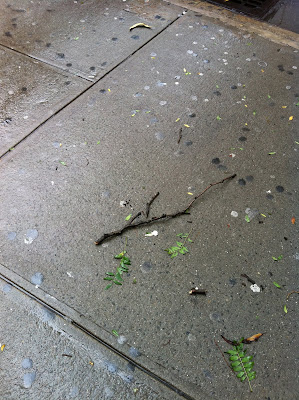 I also saw some busted police tape. No doubt the awful wind or a homeless person seeking shelter. 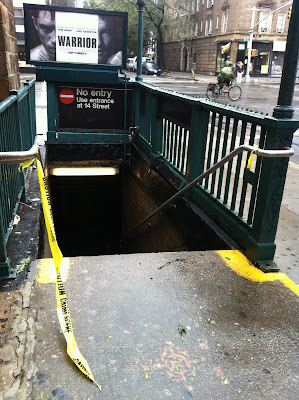 I walked out to the mighty Hudson River. The water was choppy, but like Vegas wave machine choppy. Not tsunami choppy. 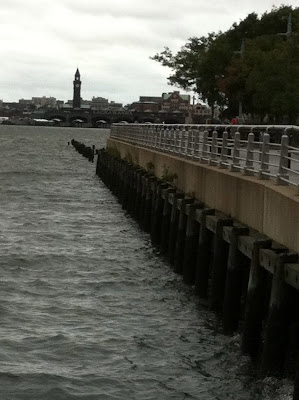 Then I saw parents with their kids playing soccer and people jogging. Something was really wrong. Where is the hurricane? I filled my bathtub with water! I bought extra ice cream! 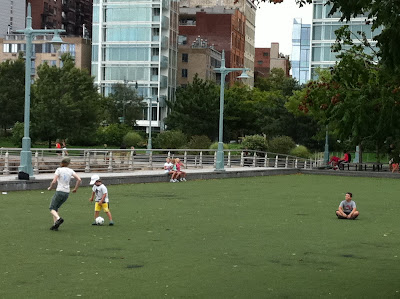 I must be honest and still give kudos to everyone that told of the complete annihilation that may lay ahead. I think they did a good job and even though it didn't warrant shutting down the subways or Broadway it was a good idea. Much better to react like this than to react like they did with Katrina. So kudos all. And me? Well, I just have some extra bottles of water. No harm. And now foul.

I even met a lovely couple from close to where I lived in LA. She is here because her mum is dying of cancer. I told her about mine and how tough it was but how much she is doing all the right things. Lovely people. I wish her well.

So folks, this about wraps up my Peabody-worthy news coverage of Hurricane Irene Comes to the Big Apple. And the apple didn't fall from the tree, but it was a fun event and thank God really there was minimal damage. 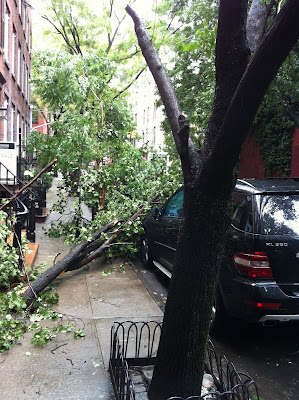 This just in....3:48 ET and ther wind has really kicked up. I wouldn't be in a skirt out there. (Well today or any day really, but to each his own, but I just mean it is really windy.) 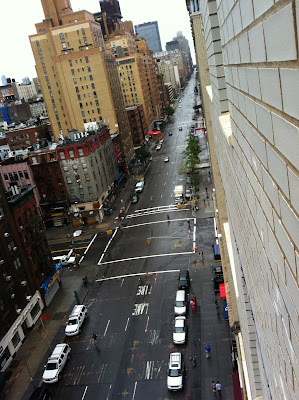 Ho hum. Is this a break in the weather and I venture out and then get immediately swept out to sea never to been seen again? Will I stick my head out and get thwumped by a passing STOP sign? Is it over? Or is it just a tease?

Folk are out walking dogs, strolling. Like it was just a blustery day. WTF? Where is the Hudson at my doorstep? Where is Anderson Cooper in a canoe on 7th Avenue? Where is:
Where are these things? 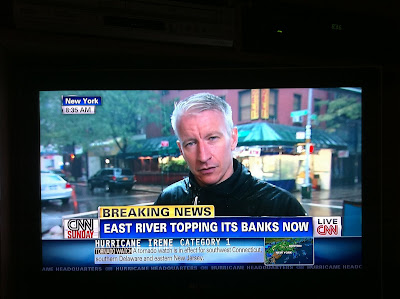 I had to rely on my field reporter Anderson Cooper for this report. East River Tops Its Banks. I cannot see the East River from my bedroom window. When the East River comes pouring down the streets of the West Village I will be all over it, but until then I must rely on outside sources.

What I can tell you is it is still raining and people are still not going to brunch. Of course it is early for brunch.

Posted by Patrick Connolly at 8:38 AM 3 comments: 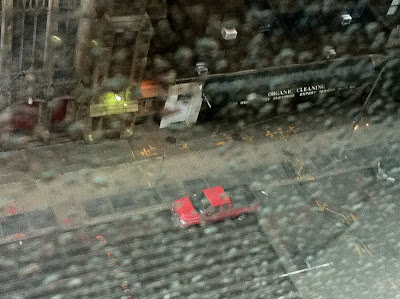 Awoke to the sound of the wind, like a dog howling. No, a coyote howling. A coyote from NW Utah. Soulful, but confused. That was the sound I heard mixed with the wailing siren calls of emergency vehicles.

8:07am ET Sideways curtains of rain blow down 13th Street into the scalloped, cantilevered etages of St. Vincent's O'Toole Building. An American flag waves outside. To no one in particular. Well, to no one as that is what is on the street. 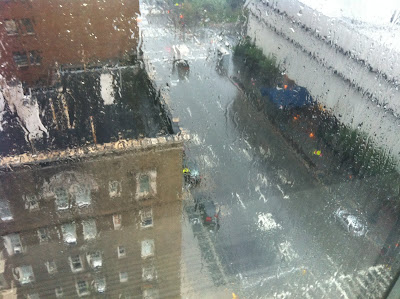 Yes, not man nor NW Utah coyote on the ground save for the emergency vehicles outside the Donut Pub on 14th Street . I do not say this in jest as that is exactly where I would be if I was an emergency vehicle waiting for duty. 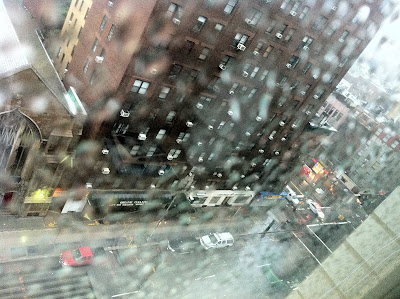 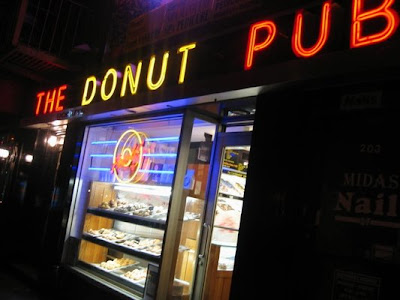 We are currently in the eye of it right now for the next few hours. Heavy rain and wind. I will hold judgement on Irene, but to me so far she us just full of bluster.

Posted by Patrick Connolly at 8:01 AM 7 comments: 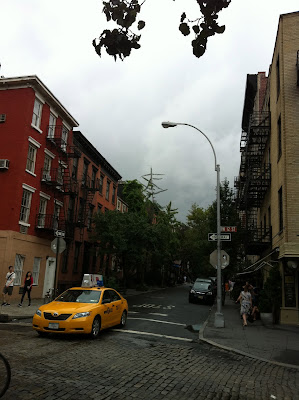 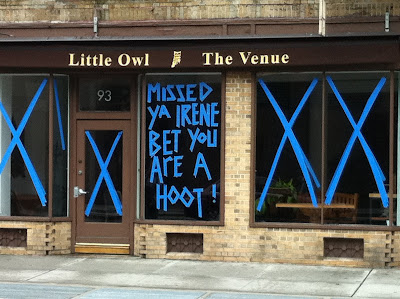 I have not blogged in forever and thought "baby's first hurricane" was a good way to start back in. It is dynamic, it is unprecedented and it is New York. I say unprecedented because never in the history of the city has the whole MTA subway system been shut down. Not to mention the airports and ALL the shows on Broadway.

I took a walk to get some air and saw a lot of tape. Reminds me of the Scotch tape skit on SNL when the Scotch Tape store was doing a booming business because every other store needed tape to hang up their "GOING OUT OF BUSINESS" signs. 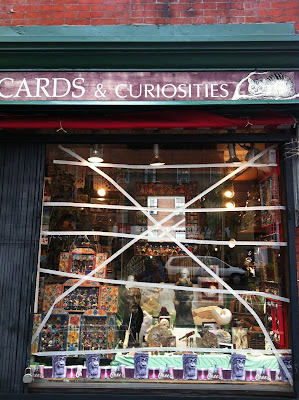 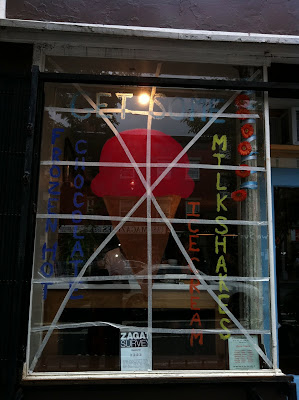 From my view in the West Village, all seems calm before the storm at the moment. I went to the gym this morning before it closed at 11am. Then I tried to get some last minute stuff from Duane Reade but the doors were closed. In a city than never sleeps there is nothing to be done than to do just that. 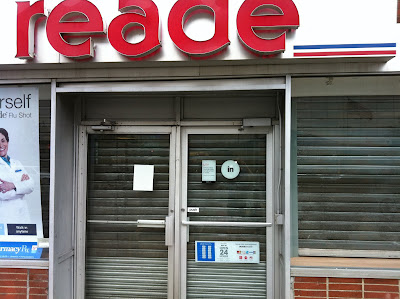 Stay tuned to The Weather Channel or Manhatin.blogspot.com
Posted by Patrick Connolly at 3:45 PM 6 comments:

From Britain with Love

My pal Marica and I went to opening night of "From Britain with Love" at Lincoln Center.
First we ate at Cafe Luxembourg which I had not stepped into since I celebrated my 22nd birthday there with my friend Craig when I last lived in New York. Wow. Loved it. It has not changed a bit. I have.
The event at Lincoln Center was a screening of Toast, based on early life of Guardian food writer Nigel Slater. I had read the book and quite enjoyed it. The director SJ Clarkson was there for a very fun Q & A. She is just a stitch and a storyteller. Marica and I got a chance to speak with her at the reception and she was someone I could have talked to all night. I am attracted to peoples' "delivery" and their take on life. She was one for certain.
A fun night out of dining well and then watching a movie about food.
In the small town that is New York I saw my friends Tom and Philip at Cafe Luxembourg (I had seen Philip earlier that day at the drugstore in the West Village) and then at the film! What fun.
Met some really nice people at the reception and just had a fine night out in New York.
Posted by Patrick Connolly at 1:32 PM 6 comments:

The HIgh LIne - When You Need a Lift 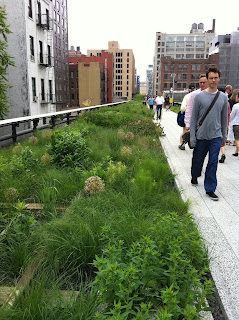 Nothing says New York like the opening of the second phase of a rusted elevated train converted into a park. I was there. Well, not for the opening, but one the opening weekend.

The High Line rocks my world every time I walk on it. Probably because it is urban, enviro, groovy, close to my house (house meaning apartment, just another sign I am not a native) and mostly for the...wait of it.... perspective.

This has been a tough year for perspective for me. 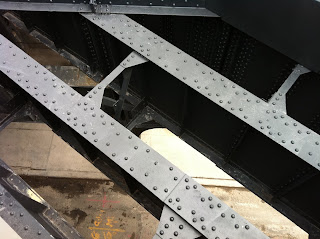 But the perspective I get from walking on the High Line always bedazzles. It is not looking from high atop the Empire State Building (a magnificent view though I like the top of the Rock better) and it is not street level looking up. It is that "just a little bit" lift like your father putting you up on his shoulders when you were a kid that changes your whole view of things. 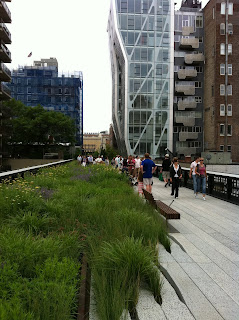 I love seeing the tenement buildings from up here. I look at their detail as I never did "on the ground." In "part deux" I really enjoyed looking down the leafy Chelsea streets as if I was on a camera crane shooting down or I was in a bird's nest (or whatever you call them) working on a telephone pole. The world is just a bit different from up here. 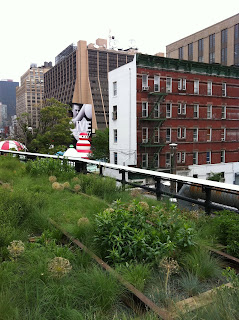 Please when in New York wander/meander through the High Line and change your perspective.

Posted by Patrick Connolly at 8:25 AM 12 comments: